The Schotis’s story began in 2014. Ramón Penela, founder of Unostiposduros and a dear friend, had long wanted to make a type the both of us together. Together means I’m the doer and he puts the theoretical approach, and that means he doesn’t work at all. It’s just the Ramón way!

The Scotch Romans are a strange case in the history of typography. Although they were one of the most used letters during the 19th and early 20th century, they don’t have their own place in the main typographical classifications.

They appeared at the beginning of the 19th century with Pica No. 2 in the catalog of William Miller (1813) and assumed the British route towards high contrast and vertical axis modern romans. In fact, they were called just Modern. In opposition to the continental route of Fournier, Didot, and Bodoni, the English way opted for a wider, more legible letter also resistant to bad printing conditions. 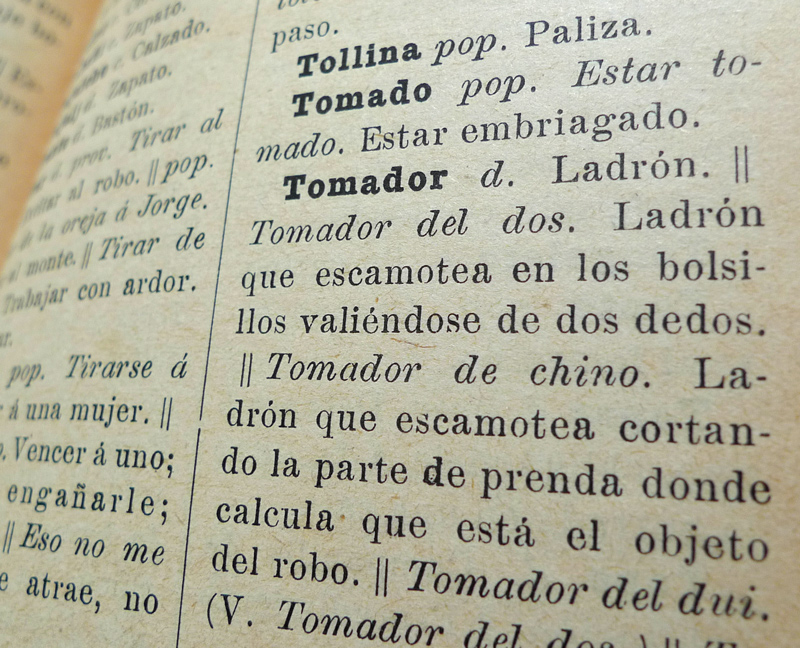 There were two coincidences that convinced me that I had to do this typeface. The first one was the finding of an old book in Madrid’s flea market: Diccionario de argot español (Spanish Slang Dictionary). It was a hilarious wonder-book found among a collection of clumsy early-20th century books, that, of course, was composed in a Scotch face. Seeing that the majority of the slang I use today is a century years old at least, somehow connected me with the book and with the fantastic look of those letters printed in the yellowish pulp paper. Even the book was printed on Molas street in Barcelona, that also means You’re Cool street in slang!

The second thing that convinced me to do the typeface had to do with the name. For me, a good name brings a lot to the character of a typeface.  In this case, any name related to Scotland would inevitably be a not very original googled cliché. Then I remembered an information that few people know (until now).

The coincidence between the scotch roman and the slang and popular dance of my city were, to me, so amusing that I simply couldn’t say no to this typeface. And this is how Schotis started.

I have avoided the exaggerated crispy shapes and contrast of the 19th century Scotch Romans to achieve a modern look and better legibility at small sizes, leaving the fun drawing for the next Schotis Display.